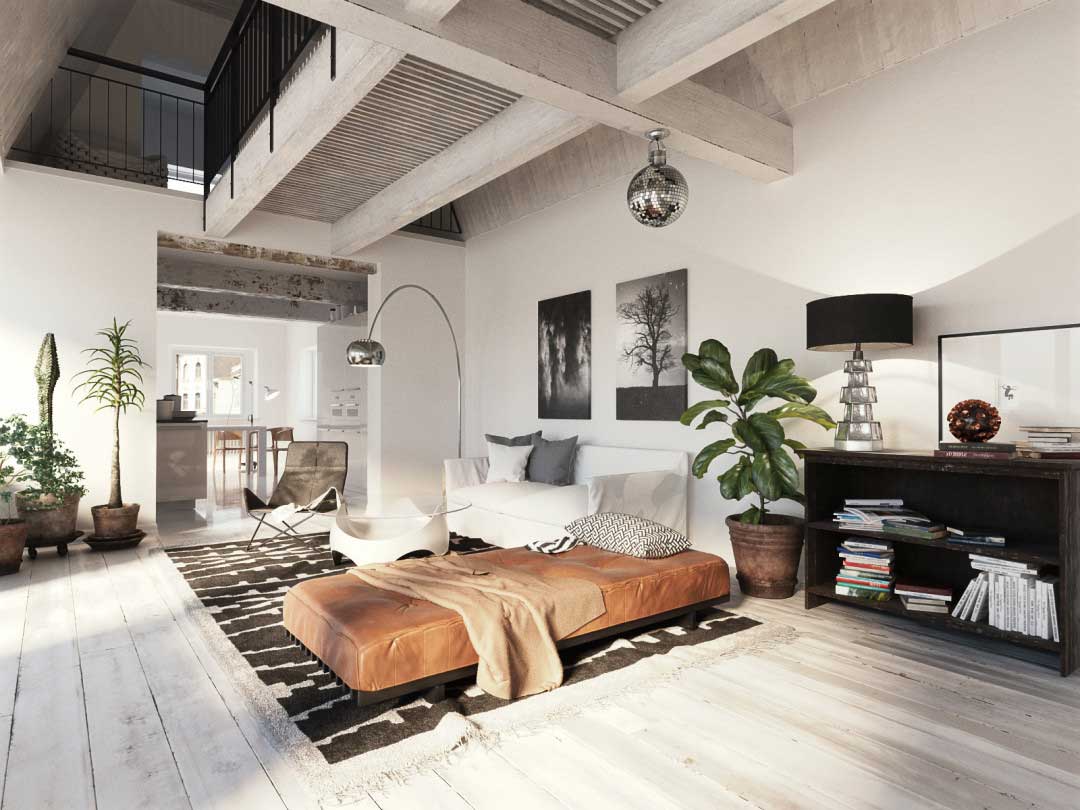 3D rendering is everywhere around. The many uses and benefits of this practice have contributed to its widespread popularity. The term, short but resonating, is known to many people from different walks of life. However, not all of them are sure what 3D rendering actually entails.

If you want to know more about this topic, too, stay with us as we discuss the meaning and process behind 3D rendering, as well as its history and future in the fields of architecture and construction.

What Is 3D Rendering?

Unlike some other types of visual arts, 3D rendering isn’t complicated to define. The craft in question may require knowledge and particular technical skills, but the process itself is pretty straightforward.

Simply said, 3D rendering is the process of creating a desired image using a computer.

However, it should be underlined that not every computer-generated image is a 3D render. A specialized software system is involved in the creation of 3D images, making them a lot more complex, detailed, and realistic than other images.

So the correct definition would be - 3D rendering is when specialized computer software renders lifelike images using three-dimensional data.

Without said data, 3D rendering wouldn’t exist. This refers to every detail, as seen in real life or imagined in one’s head, that must be put together in order to create a highly authentic rendition of the original model. In practice, these are elements such as material and lighting.

As one of the final steps in 3D visualization, 3D rendering relies on 3D modeling to provide the essential framework. Once they have a 3D model - say, a building - 3D artists use it as a sketch and add desired material and lighting in order to create a lifelike illusion of dimensionality.

All this data is then processed by a computer in an operation known as 3D rendering.

We’ll see that the end result of this process can be used in a myriad of ways and applied in various professional scenarios. But no matter the actual application, the ultimate goal of 3D rendering is always the same - to create a visual tool that looks and feels as real as possible.

How Is It Used in Architecture and Construction

Architecture is notoriously precise. And how could it not be? In both design and construction, the slightest mistake can make the end product unusable. This is where minor flaws translate to considerable losses in money, time, and creative energy, not to mention the actual material.

Simply put, there’s no space for blunders and misunderstandings in architecture.

This is where 3D rendering comes in.

As a way to communicate with clients, 3D rendering helps architects create a virtual reality of sorts. Not as a photography, but more as a simulation, this type of image can actually walk people through yet-to-be-built constructions and showcase them in real-life scenarios.

Another thing that differentiates 3D rendered images from photography is the ability to show and test digital models in simulated surroundings. For example, it allows architects to simulate how certain materials act under pressure, thus checking their durability and sustainability.

But 3D rendering is still best applied as a communication tool.

This is true whether it is used as a means to inspire the ideation process or to facilitate conversation between architects and their clients. In both cases, 3D rendering enables architects to express and better their design while staying true to clients’  vision at the same time.

Having a highly realistic image or simulation - depending on the project scope - is the best, if not the only way of avoiding potential miscommunications before the actual building begins. It allows for both aesthetic fine-tuning and functional changes to take place before it's too late.

What’s more, changes in 3D rendering can range from minor to conceptual. Even though sometimes this process takes days to complete, it's still not as irrevocable as the real thing, nor is it as time-consuming and costly. With 3D rendering, precision and transparency are guaranteed.

When we hear 3D, most of us think about blockbuster Hollywood and immersive VR video games. Both of them rely on the same rendering technology as architecture, construction, interior design, and product development to provide futuristic-looking presentations.

Dating back to the early ‘70s, these software systems have come a long way in the past five decades. In the beginning, they were simple computer programs, some less complex than today’s lightest smartphone apps, instructed to create basic forms like cubes.

The most important name in the history of 3D rendering is Ivan Sutherland, a computer scientist widely regarded as a pioneer of computer graphics. The very first 3D rendering program, appropriately named Sketchpad and designed to sketch cubes, came from his lab.

Sutherland’s student, Edwin Catmull, along with another computer scientist, Martin Newell, gave crucial upgrades to Sketchpad during the ‘70s and ‘80s. And while Catmull contributed to the birth of the action movie as we know it, Newell went a step further.

His legacy is known as the “Utah teapot” computer model, but it is actually a reference object for 3D artists to measure their computer-generated reality against.

Another notable mention goes to Zaha Hadid, a major influencer in 20th-century architecture. His awe-inspiring project, known as “The Peak'', was one of the first architectural presentations to be done using the early CGI concepts and 3D rendering programs.

During this time, dedicated computer systems have become more equipped for performing complex rendering tasks, all while getting easier to develop and operate. A number of 3D rendering programs, including Autodesk, have become available for mainstream use.

Propelled by a series of amazing tools for computer-generated visualization, ‘90s artists have become increasingly interested in making 3D images. The development of BIM and CAD helped them become proficient in it, too. These years mark the birth of modern 3D artists.

When we say that 3D rendering is everywhere around, we usually mean architecture and movies. But it’s also a big part of today’s engineering scene, especially when it comes to mechanical product design. And let’s not forget the importance of eye-catching imagery in marketing.

All this is to say that 3D artists come from different technical backgrounds and showcase a myriad of highly specialized skill sets. Sure, 3D rendering requires them to be both schooled and experienced as digital artists. But just as equally important is a curious and inventive mind.

More or less, all digitally native architects are educated in the technical domain of 3D rendering. Whether they are good at it or not depends on their personal career choices. Some decide to outsource this part of the process to 3D artists; others remain adamant about doing it with no help.

In other words, architects don’t necessarily need to be 3D artists. However, all 3D artists involved in this field are, by definition, architects.

Benefits of 3D Rendering in Architecture

Thanks to computer scientists of old, modern-day architects can create with ease and efficiency never before seen in this field. From this stem numerous other benefits of 3D rendering in architectural projects, a few of which we’ve already mentioned before:

From concept to reality, 3D rendering removes all risk from architecture.

If given time, 3D artists have the luxury of toying with different concepts and elements. Unless there’s a very specific idea or project scope that must be met, architects can use 3D rendering to experiment with an array of lighting and different textures without any limitations.

In terms of creativity and pioneering, this artistic liberty is of key importance.

This risk-free aspect of 3D rendering is helpful even when architects must stay within the boundaries of a previously devised framework. In these situations, the best rendering programs enable early troubleshooting and easy damage control before the final iteration.

We’ve already talked about what precision means for architecture, so let’s highlight once again the overall cost-effectiveness of computerized accuracy. Just imagine 3D rendered images as blueprints. That’s what they ultimately are, down to the last measurement.

Without this level of precision, architects would be lost.

The most exciting aspect of 3D rendering, however, has less to do with scaling and math. Even though beauty and appeal could never be achieved without accuracy, what the client sees is still the single most important thing in architecture. A picture worth a thousand words.

When it comes to perfection, it could be said that 3D trumps photography.

Unlike photographs, 3D rendered images can show how materials behave in different situations. Perfect lighting is achieved without having to wait for the golden hour, for example. In interior design, 3D rendering displays how elements interact with each other in real-time.

As if understanding technical terms wasn’t difficult enough, most clients also face problems when it comes to visualizing what’s out of their grasp. Expressing ideas verbally isn’t enough. Architects depend on visual aids to help them articulate concepts in a straightforward way.

With 3D rendering, what you see is what you get.

This removes friction from the communication process, which makes clients more confident in their decisions. Since 3D rendering brings much-needed transparency to architectural planning, it also helps save time, money, and energy required for every project, big or small.

Before fruitful communication and successful projects, long before the planning process and even ideation, architects must learn to stand out and convince clients to choose them over the competition. Marketing may not be artsy, but it’s absolutely crucial to making art.

A CV full of beautiful 3D rendered projects is brilliant for this.

Why 3D Rendering Is the Future

When it comes to technology, we’re witnessing the “future” every day.

The same applies to 3D rendering.

With new tools being developed and old ones being improved on a weekly basis, the technology needed for creating amazing 3D images will only keep getting better. And 3D images can move, too. This is the basic concept of CGI, after all, which shows all its creative potential.

That’s also where 3D rendering is headed at the moment.

3D simulations are becoming easier and less expensive to make, helping these groundbreaking tools reach their mainstream use. But there’s one more frontier to be conquered, and that’s 3D rendering in real-time. We’re seeing amazing attempts at this every day too.

Both complex simulations and real-time 3D rendering are a testament to how there are no longer practical limitations to what computers can draw.

In architecture, 3D rendering is no longer a plus - it’s a requirement. Visual fields and picture-oriented industries that fail to embrace this technique will shortly disappear. Simply said, 3D visualization is a new non-arguable staple for all artists who choose digital form.

Seen and experienced in 3D, images offer unmatched quality. Unlike photography, they allow for major changes to take place before the end result. In some cases, they are even easier and less expensive to make. But most importantly, 3D is bigger, better, and more powerful.

Who knows what computer-generated images will look like in the future? The very nature of technological advancement stops us from imagining great things before their time.

It can be said for now that 3D rendering has come a long, long way from its humble beginnings back in the ‘70s. With every decade applying its brightest minds to this unstoppable evolution, it’s only natural that today’s computer-generated images are so easy to make and even more irresistible to see.

Saying that we’re looking forward to what’s next would be an understatement.