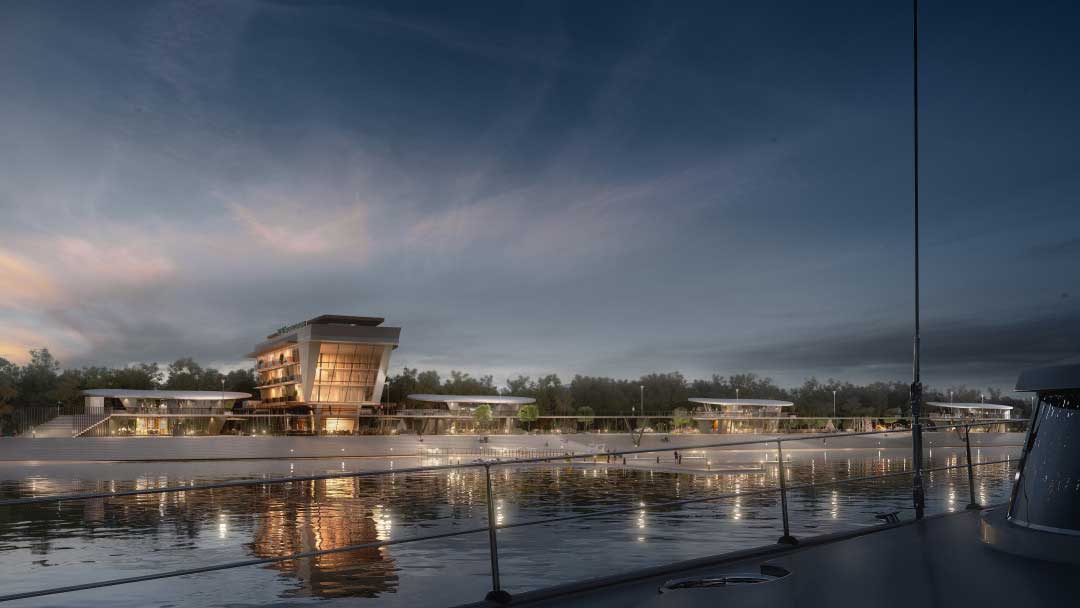 Sure, it does require some level of tech-savvy and knowledge about computers and their main components, but other than that, it’s all about following trends and staying in the loop with what makes it for top quality in the rendering world.

Most artists are also wrong when they say that building your machine is an expensive endeavor due to quite costly software components. Well, at Easy Render, we deal with everything related to architectural visualization, software included.

While paying for your software gives you some advantage over people who use free components, you shouldn’t overlook the power of the best free software for architectural visualization.

You can either choose to buy a pre-built machine, which has its benefits, but we recommend you consider building your own. With all this in mind, let’s see what it takes to build a machine powerful enough to handle 3D rendering and architectural visualization with ease.

3D Rendering in Architecture is Demanding

3D rendering in architecture demands superior computing and processing power. Since speed is everything in these matters, your success solely depends on what hardware you’re running, what options and features you’ve set, and which software you’re using.

There are thousands of variables that need proper processing. It takes tremendous power to render even a simple scene. That’s simply because your machine simulates not just how your eyes perceive the image but also the real-life conditions around it.

The complexity of your rendering depends on the material and the texture of each simulated object. Some hardware tools are more powerful in processing these objects and accomplishing these kinds of tasks. If you want to get the best results, you need top-quality components to be able to render even the most demanding of projects.

Both Software and Hardware Matter

When it comes to choosing the best components for your ultimate 3D rendering beast of a machine, it’s essential to understand the purpose of each component. This knowledge allows you to customize your machine to better suit your rendering and architectural visualization needs.

Here’s a bit of professional advice – go for the software first. Start building your machine by selecting software and move on with choosing proper hardware that goes with your software selection.

Components You Should Consider

Everything starts with selecting your processor or CPU. CPU and GPU or your graphic/video card are the two main components to worry about. If you decide to go with a pre-built machine, you need to understand that not all machines are the same.

In other words, different machines are used for different things. If you have two completely different configurations with the same specifications, they will perform differently for various rendering and visualization tasks.

Now that you have a clear picture of where to start working on your build, let’s review each component to inform you on what to look for exactly.

The video card or GPU is one of the essential components your machine needs to be able to handle outputting images to your monitor/screen. While it wasn’t possible to handle 3D rendering on the GPU before, it has now become a possibility.

It’s only thanks to so many popular renderers steadily releasing separate and quite powerful GPU versions. GPU can significantly speed up your render times, which can open certain possibilities.

However, there are still some issues to overcome here. The first problem is that GPU may boast faster render times, but it will do it by sacrificing quality. If you value quantity over quality, this may be a solution.

Still, you should know that GPU isn’t a solution for when you need to handle complex simulations and large scenes. GPU rendering isn’t that popular in the architectural visualization realm yet, but it is upgrading and improving.

It’s already an essential part of professional artists’ workflow. In the case of architectural visualization, GPU can help speed up render times. Go for the most powerful card your money can buy.

When it comes to choosing RAM capacity for architectural visualization, you need enough RAM to avoid any CPU throttling that happens when your RAM is filled. CPU throttling refers to the CPU’s power to process data transfers much slower than usual.

When you don’t have enough RAM, the CPU has to take over all that processing work, which pretty much weakens it. RAM is an enabler that allows your CPU to work at its full power. When choosing your RAM capacity, 32 GB RAM is a general rule of thumb.

That should be enough to handle small to medium size architecture visualization projects. However, we recommend taking at least 64 GB RAM as it shortens loading times when starting a render. There is also enterprise segment RAM that can be ECC-enabled and combined with motherboards and CPUs capable of supporting larger RAM capacities, such as 512 GB or more.

Of course, you’ll only need this much RAM if you’re working on huge and highly complex real-life scenes for movies, etc. 64GB is the ideal amount for most builds. It is pretty enough to handle editing 4K videos, rendering at ultra-high resolutions, including complex scenes.

The best thing about RAM is that upgrading it is trivial if you have a motherboard with enough space for it.

Your CPU is the primary source of your rendering power. Aside from that, it’s also in charge of your entire machine and performing program executions, calculations, and so much more. While rendering is more of a GPU thing, architectural visualization is more of a CPU thing.

In other words, you need a powerful CPU to complete the majority of architectural visualization work. While this could change sometime in the future, having a powerful processor is vital for avoiding slow render times.

In the case of choosing CPUs, speed isn’t the essential thing to worry about, but the number of cores as well. The more cores a processor has, the better it is at performing multitasking. A CPU with only one 4GHz core is as effective as a CPU with four 1GHz cores.

Now, aside from your CPU, you’ll also need a good CPU cooler to keep the temperature of the processor as low as possible to prevent it from overheating. Most processors come with their stock CPU coolers, but these aren’t enough for what you have in mind. Liquid CPU coolers are the thing now, so aim for that.

A machine for architectural visualization doesn’t need huge storage space, but it does require an adequate storage device to keep your modeling files, assets, and images safe. You have two main options here:

SSDs significantly speed up the load time of programs and applications. If you need a real speed boost, replace your HDD with a SATA SSD. However, if it’s performance that you’re after, we suggest you go for a more expensive PCIe SSD.

A benchmark is a test that helps you compare the efficiency, performance, and speed of your newly built machine. It helps you establish the level of efficacy of your GPU, CPU, etc. The benchmarking program enables you to know the exact performance of various components like CPU, GPU, RAM, processing throughput, and more.

It helps you check the speed and everything else using various block and file sizes, caching options, and more. A typical benchmarking test assesses some of the core factors like the voltage, temperatures, and clock speeds.

However, it can also record the rendered frames per second to compare them with standard parameters. It would be wise to properly test the most important benchmarks for architectural visualization, such as CPU, GPU, processing power, and RAM.

Many professionals are using VR technology to explain a project to their clients who know nothing about architectural visualization. Hence, VR headsets are bound to become a standard piece of equipment in your PC arsenal. If you want to build a machine capable of creating visualization wonders, you’ll need a VR headset. Here are some recommendations to look into:

When it comes to minimal performance needed, we’re talking about a budget workstation build that can turn out to be quite powerful even though it’s cheap. Here are the components:

It’s always better to go with a recommended build to avoid any problems with your projects. A recommended build refers to performance specs your machine should have to be able to handle architectural visualization. Here is a good recommendation:

This little guide is aimed at all those who are seriously considering building their machine for architectural visualization. It does take some knowledge around PCs to get the job done, but it doesn’t have to be too complex. There’s a build for every budget. It all comes down to what you need and expect to achieve.