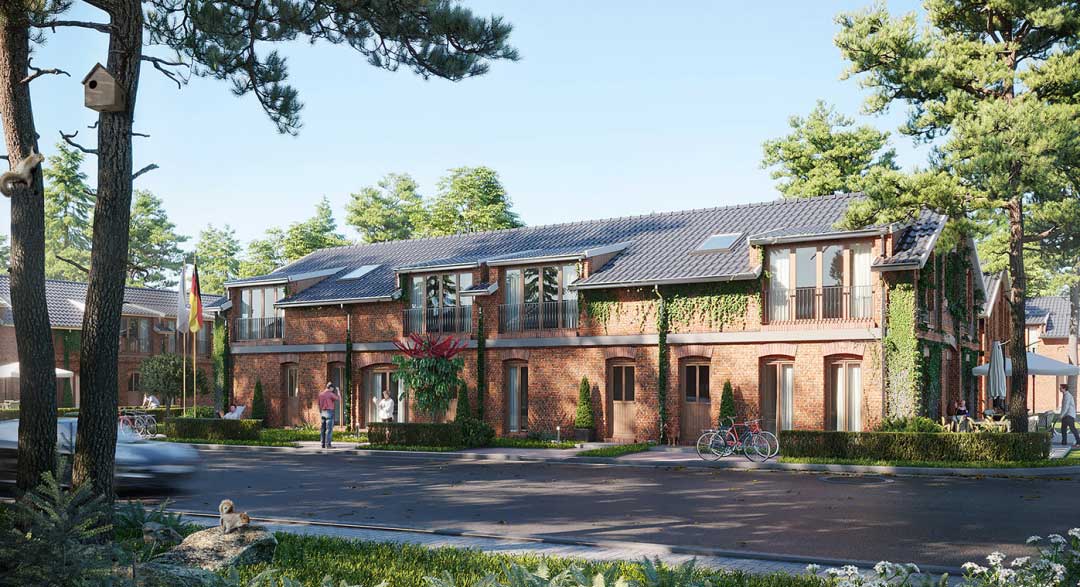 How many times so far have you thought a picture of a building is real only to turn out it’s a 3D render? Don’t worry; your eyes didn’t betray you. The technology has advanced to the level where we are not able to tell the difference between what is a computer-generated image and what’s real. These so-called realistic 3D visualizations in architecture look as if you’ve snapped a photo with a DSLR.

It makes you wonder how it is possible, doesn’t it? Well, if you want to find out how 3D visualizations in architecture work, you’ve come to the right place. Let’s start with some basics.

A 3D image has the power to bring buildings and interiors to life. It can also be used to showcase the new building in the neighborhood and assess its impact on the visual experience. A 3D image is generated from a computer model. Every 3D visualization starts with a 3D model in a computer.

One of the best things about 3D rendering is the flexibility it offers. Architects can use it to generate renders from multiple angles. If necessary, they can make changes to the model and generate new renders on-demand. It wouldn’t be possible without proper software and hardware.

3D visualizations in architecture wouldn’t be possible without 3D rendering software. This software is specifically developed to use CPU units to generate high-quality images. Over the years, the software has become quite powerful. Users don’t even have to have it installed on their computers. With cloud technologies, users can now create and render stunning 3D visualizations in the cloud.

Then we have lighting. The new 3D rendering software is very advanced when it comes to lighting effects. It enables users to do anything they want with lighting. It has support for glows and reflections which result in more realistic renders.

The role of hardware

Hardware plays a vital role in the 3D rendering process. There is even a type of 3D rendering that’s called hardware rendering. It uses only video cards and drivers to render images. However, this is an obsolete rendering technique. The most commonly used type of rendering for realistic 3D visualizations in architecture is software rendering which leverages the power of CPU instead of GPU.

Over the years, a lot has been done in the field of CPU. The CPUs from just ten years ago are impossible to compare to the new models. Multi-threading and multi-processing are our reality now. More importantly, the best 3D rendering software is updated to leverage the newest technologies in CPUs. It affects renders in multiple ways.

The user behind the screen is also an important factor in the process of producing realistic 3D renders. The knowledge, experience, and expertise impact the entire process. A 3D artist has to be well-versed with the 3D rendering software they use. It will enable them to make use of all the features and settings to their full potential.

A highly skilled 3D artist, for instance, will know how to set up a scene in terms of object proportions properly. They will understand how to leverage objects available to them to create a realistic scene. They will also leverage proper textures and lighting settings to make scenes indistinguishable from reality.

Finally, an experienced 3D artist knows to pick the right angle for the render and how to configure the rendering.

Where is realistic rendering used?

Realistic rendering is a modern technique. It is used to render images and videos that are nearly identical to a photograph or a recorded video. It has found many use cases, and today it’s used across verticals. Some of its latest use cases are architecture and interior design. More and more 3D artists are hired by architectural firms year after year as realistic 3D visualizations help create more business.

How the process works

The best way to understand how something works is to dive deep into the process. The process of realistic 3D visualization in architecture is not that hard to wrap your head around. There are a couple of processes that a 3D artist has to complete in order to deliver what clients expect.

As in any other creative project, the first step is assessing the needs of the client. Artists then have to analyze the project and design. Once they are 100% sure what needs to be done, they start 3D modeling, adding details and lighting. Let’s see how the process works step by step, shall we?

Assessing the needs of the client

Every project in architecture starts with communication with the client. The same goes whether a firm uses 3D visualization or not. Since the client comes first, it is of utmost importance to identify their needs. It’s not hard to achieve as long as you stay direct.

Experienced architects let the client elaborate on what they need. The more information you have, the better. This is important for two reasons. Clients often need something that is impossible to do. It’s the architect’s responsibility to communicate the specific limits for any given project to the client.

Secondly, the abundance of information can greatly help 3D artists. They will know what needs to be done down to the last detail. It includes various things ranging from the size of the building to textures. After collecting the information and assessing the needs of the client, the 3D artist analyzes the project and design.

Analysis of the project and design

Realistic 3D visualization starts when the architect provides the site master plan and building drawings. Without land-use planning, it’s impossible to create those realistic 3D renders that show the building and its surroundings. When the client’s needs are made clear and all the plans and drawings are made available, the next phase can begin — analysis of the project and design.

This is the critical stage for any 3D visualization project. It refers to the phase during which a 3D artist outlines the entire project and makes the plan for the upcoming work in the 3D software.

If the project analysis and design planning are successfully completed, a 3D artist can work on a project without having to consult the client again. Everything is clear and very well defined, ranging from features in the finished product to camera angles. This brings us to the next step — 3D modeling.

The process of 3D modeling

Believe it or not, every realistic 3D render is a gray 3D object at the start. The process of 3D modeling is when a 3D artist uses the relevant software to create a scene. They don’t use colors, lightning, or textures during this phase. They just use 3D models either that are ready-to-use in the library or create new ones from scratch.

When creating objects from scratch, a 3D artist will form a mech by manipulating points in the virtual workspace. A collection of these points forms an object which is most often a polygon. An artist can then generate polygons manually or use a script to automate their creation. Every object in a set is created from polygons. The more polygons there are, the more natural the object’s surface is.

Every object ranging from a screw to a tile on the roof has to be created and carefully added to the scene. This phase can take more time if an artist has to create too many objects from scratch.

The physics of light and reflection are fundamental in realistic 3D visualizations, especially in architecture. Light is what gives the image that realistic view, and it’s up to the artist to make sure which scenes are going to use artificial light, where the natural light will be dominant, and where the mix of both is unavoidable.

The most important thing done in this phase is to ensure the light position and light sources match how the lighting looks and feels. Any discrepancies and the scene not only looks less realistic but also less authentic.

Reflections and shadows are there to complete the scene. They come as the final addition to make the scene appear more natural and if it was photographed somewhere in the real world.

For it to be realistic, the level of detail in a 3D visualization has to be as high as possible. After lighting, details are the second most crucial element when it comes to making a render as lifelike as possible. Details make all the elements in a 3D model appear as if they were real. What details are the most important?

Textures need to be carefully sourced and placed on 3D objects. Fortunately, many of those textures are found in the 3D rendering software libraries. Nevertheless, there are some 3D artists that will use completely custom textures to deliver that realistic look and high quality even when renders are done in ultra-high resolution.

Once the textures are done, a 3D artist will add more detail and sculpt objects to deliver that final polish before rendering the scene.

At this stage, a 3D artist has to create a 3D render. A realistic 3D visualization for the ongoing project is easy to create when all of the previous phases have been completed successfully. The artist can make a final check to ensure that everything is done per requirements and proceeds to 3D rendering.

The first thing that the artist has to do is to set the camera location. Since we are talking about realistic 3D visualizations in architecture, the artist usually places the camera at the height of an average human. When it comes to the renders of the building exterior, all angles are in play.

Generally speaking, the 3D artist has the freedom to generate as many 3D renders as they want. It is up to the client or art director to request any changes.

Here we are at the end of the project. The ball is in the client’s court. In some cases, the work will be reviewed by the agency’s art director before it is forwarded to the client. In either case, the review will result in feedback. Feedback can be either a green light or a request for changes.

If a client requests changes, the 3D artist will edit the 3D model, textures, lighting or simply change the viewpoint and generate new 3D renders. These new renders are then sent to the client for final review.

Realistic 3D visualizations are becoming a standard in architecture. Architectural firms use them to get more clients and offer next-level services. Hardware and 3D rendering software will continue to play pivotal roles in future developments in the field. Let’s not forget 3D artists. They are the ones who execute tasks and do 3D rendering hands-on. Hopefully, you now understand how realistic 3D visualizations in architecture work.